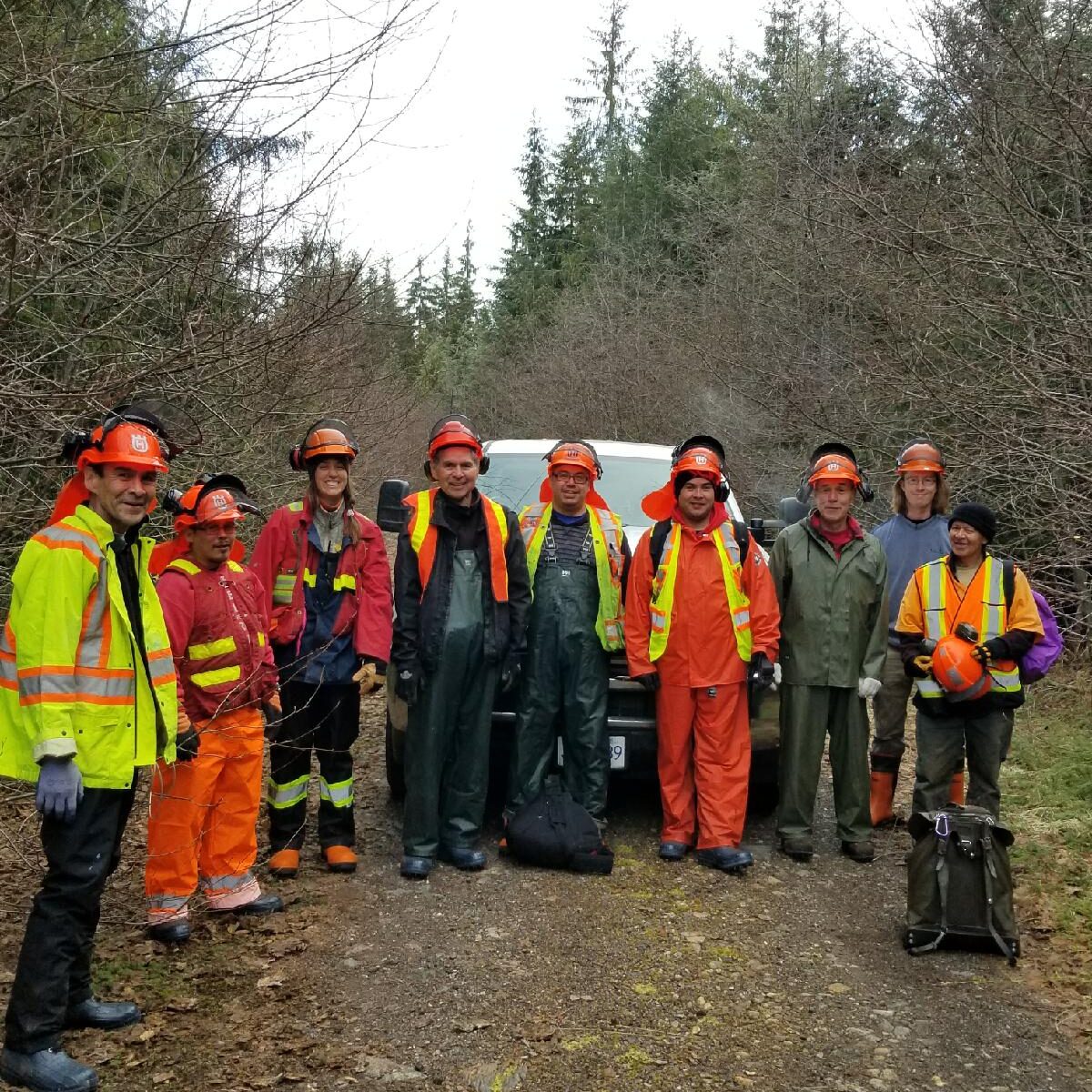 HAIDA GWAII, B.C.— over the last two years, Taan Forest Limited Partnership (Taan Forest) has utilized over $1.6 million in funding from the Forest Enhancement Society of BC (FESBC) to support two projects focused on ecological restoration of close to 300 hectares of riparian and habitat area in Haida Gwaii.

The first project focused on restoring close to 185 hectares of riparian area along the Yakoun River, which is close to 60 km long and the largest river on Haida Gwaii.

These riparian areas along the river, also referred to as benches, are identified as red and blue-listed ecosystems under the Haida Gwaii Land Use Objectives Order (HGLUOO) and contain protected areas for fish habitat and a 100-year flood plain. Activity included spacing trees farther apart, the creation of snags (standing dead trees), and the initial introduction of coarse woody debris (large pieces of wood) to begin mimicking the natural processes of riparian areas.

“That river system was historically logged right up to the water and used to transport logs,” said Jeff Mosher, RPF, Chief Forester, Taan Forest. “These big rivers need biomass input to create small log jams to keep the pools stable in the river ecosystem and along the banks. Right now, the river is missing these big trees that support the bank, wildlife, and trees that would eventually fall into the river and provide structure and create habitat in the river.”

The goal is to manage second growth spruce and cedar trees to create large root and branching structures using these long-lived tree species. This management helps trees grow larger faster than they would naturally, strengthening the stream bank and providing large organic debris input to the edges of the river.

These over-dense conifer stands are less diverse than old growth stands. Opening the stand, creating snags, and stressing trees are some of the tools used to mimic an old growth stand in a shorter time frame. Snags created in riparian areas attract wood-boring insects which attract birds, and stressed trees produce seeds which attracts birds and squirrels. These prey species then draw predators like the Haida Gwaii goshawk (Stads k’un), the National Bird of Haida Gwaii and a sub-species in danger of extinction.

“FESBC has a deep respect for the Haida people, the connection they have with the land and waters, and their strong desire to improve wildlife habitat,” said Dave Conly, RFP, Operations Manager, FESBC. “FESBC is delighted to assist the Haida’s company Taan Forest in completing these important habitat restoration projects and to learn more about how important these Taan Forest projects are to the Haida people in achieving their goals.”

This project created about six months of full-time employment including employment of a crew of 10 Old Massett people hired by Old Massett Village Council who completed the riparian work—supervised by riparian specialists.

“The crew from Old Massett did fantastic work and Taan Forest aims to continue to build restoration opportunities for Old Massett and other Haida Gwaii communities to replace jobs lost from a reduced logging industry on Haida Gwaii,” said Mosher.

“The northern goshawk has a forage [feeding] range with a 5.2 km radius so we’re targeting the spacing in those areas to allows the trees to grow faster,” said Mosher.

Reducing the number of trees creates open flight paths between trees for goshawk, bats, migratory and resident birds, and allows sunlight to reach the plants on the ground which increases brush and berry development. This results in increased food for the small animals which the goshawk depends on as a food source.

Spacing and pruning was completed by additional crews from local communities on Haida Gwaii including Old Massett and Skidegate.

The overall goal of both projects is to create structure for key species of wildlife on Haida Gwaii.

“The hope is this will create more forage and canopy structure for goshawk and snags for saw-whet owls while also benefiting many other wildlife species,” said Mosher.

“Without the FESBC funding we wouldn’t have been able to do the work we’ve done so far and start an initiative for more restoration work. It’s significant towards reconciliation with the Nation and to restoring areas impacted by war-effort and pre-Forest Practices code logging.”

About Taan Forest Limited Partnership: Taan Forest is a forest management company, a subsidiary of HaiCo (Haida Enterprise Corporation), a company wholly owned by the Council of the Haida Nation and the Secretariat of the Haida Nation. The Haida Nation saw the necessity to have a direct voice and management authority in managing the forest practices on Xaayda Gwaay.yaay/Xaadáa Gwáay Haida Gwaii. Shortly after HaiCo was incorporated in 2009, Taan Forest was born in 2010 as an enterprise through which the stewardship of these forests could be managed with Haida values.