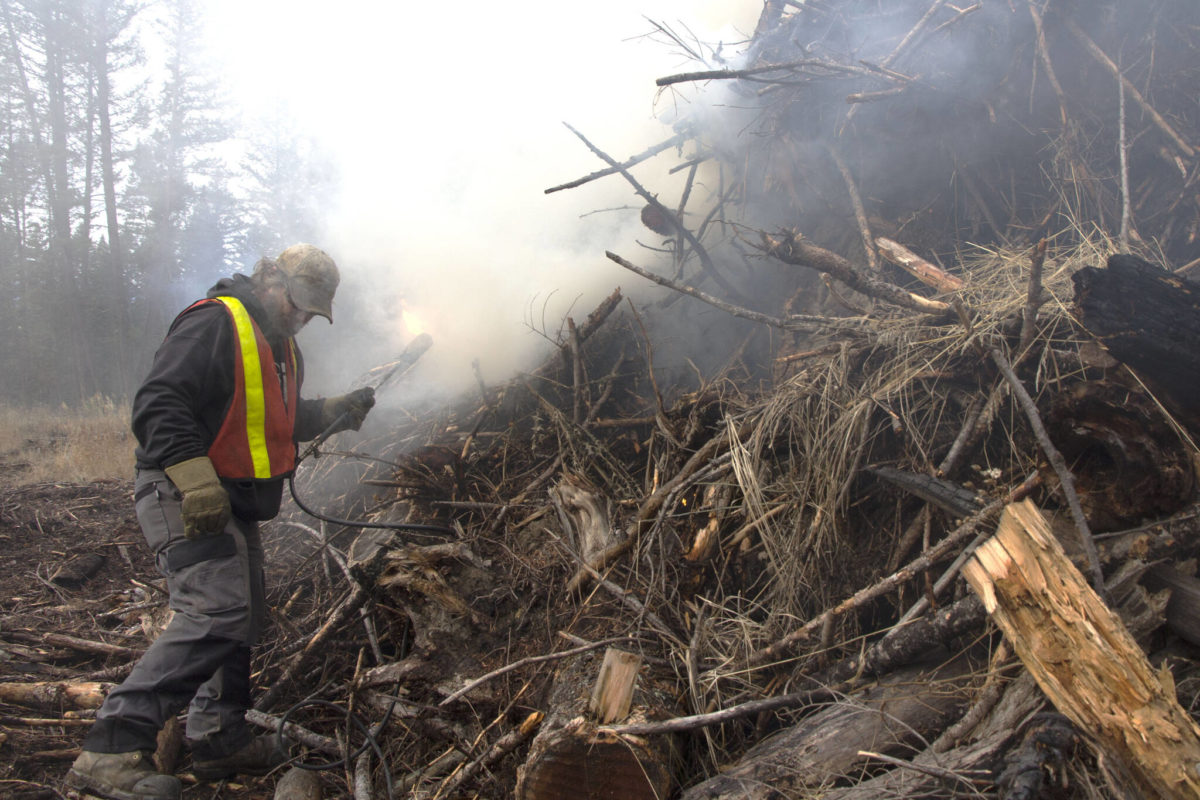 The public will have to change their mindset around burning and logging in their “backyard” forests to prevent wildfires in the future, according to the 100 Mile District land manager.

In the past, Indigenous or regular burning of the landscape every 15 -20 years meant forests were more open and there was less flammable fuel, including live or dead plants on the ground, making it harder for fires to get into the tree tops.

“We’ve got to get these ecosystems back to their natural functioning conditions, we’ve taken them away from that,” Byrne told attendees on a field trip to the 100 Mile District Community Forest last Thursday, Nov. 4. “We’ve changed conditions to make it unconducive to human habitation and wildlife.”

Byrne noted the fuel mitigation treatments at the Community Forest – a 20,000-hectare swath behind Imperial Ranchettes off Horse Lake Road – is a start to “kind of bring the (forests) back.”

Over the past three years, about $1.3 million, funded by the Forest Enhancement Society of B.C. (FES), has been spent at the community forest and the 100 Mile District woodlot near the 99 Mile ski trail and railroad to remove fuels and thin trees to open up the landscape. FES was created by the province five years ago with a mandate that includes reducing wildfire risk to communities.

Byrne said the 2017 wildfires, which led to countless evacuations in the South Cariboo and cost the BC Wildfire $649 million to fight, demonstrated the need for fuel treatments in B.C. forests. “In the three or four days after the fires got ripping, we had a conversation about ‘holy crap we’ve gotta do something now,’” he said.

This past summer, 263 fires burned in the Cariboo Fire Centre, covering 129,591 hectares in the region. The fires, following a prolonged heatwave, resulted in evacuation alerts and across the region. The Build-Up Index (BUI) in 2017 showed the total amount of fuel available for combustion in the Cariboo was above 90, reaching up to 200 in the Chilcotin, indicating the fuels were “dry enough to sustain a persistent, deep-burning wildfire,” according to BC Wildfire Service. The BUI was 90 and up to 160 in 2021.

Forester Dan Bedford, of DWB Consulting which is contracted to do the work in the community forest, noted the local forest around 100 Mile was not like this 50 years ago, with so much flammable fuel on the ground and tiny “ladder trees” that carry intense flames to the top of the crowns. When that happens, crews can’t fight the fires, he said. “It’s absolutely scary the amount of energy coming off it.

“These are not sticks, these are fine fuel. These are the fuels that dry out in a long hot summer and are available to burst,” Bedford said, referring to varying pieces of wood. “We get this stuff off the ground as much as possible. We put them in piles and get rid of it.”

Bedford credited the late Steve Capling, a professional forester, for setting up the treatments in the community forest and helping to pioneer a treatment where a buncher weed-eats the tiny ladder trees and bunches them, while an excavator piles the fuel in the treatment area. The idea is to space out the trees, while also making it safer for crews to get in and fight the fires.

Much of the pulp and fibre, as well as a significant portion of the residual waste fibre from the forest was taken to the Williams Lake Cogeneration Plant to be used as biomass for electricity, while other fuels are either logged or stacked to be burned.

FES executive directive Steve Kozuki noted the recent situation in Logan Lake, where the Tremont Creek wildfire raged toward town, showed the importance of fuel mitigation. The town created a fuel break – spacing out crowns and removing ladder and ground fuel – to reduce the fire’s intensity. They also lit a backburn to allow the fire to creep along the ground and burn out.

Byrne said he has received “messaging” that “we can’t put all the investments in suppression efforts. We’ve got to put efforts into the prevention work. That’s why this was successful. The collaboration from all of the people here is the only thing that made it successful.”

However, Bill Hadden, Community Forest manager for the 100 Mile Development Corp., noted it will take money and political will to treat the local landscape. Although close to 400 hectares of the Community Forest was treated in the past three years, this is only 10 per cent of what should be done, and doesn’t include the local Timber Supply Area (TSA) in 100 Mile House.

Byrne agreed there are “thousands and thousands of hectares” that require treatment and maintains the forest must be managed for the ecosystem – ensuring it’s resilient to pests and drought to provide habitat for wildfire – and extract the fibre from that, rather than the other way around.

“This kind of wildfire-resistant barrier has to be expanded and we have to carry that on for the rest of our forest management across the land base,” he said. “It has to be targeted at protecting those ecosystems so they can have natural function and not our version of what a pristine forest looks like.

“I hope we really run down that path hard now.”

“When you manage to fire smart in areas after the fires we’ve had go through in 2017, 2018 and now this past summer, it makes it more important,” she said. “The fires are scary as we all know. Any work that can be done in conjunction with the community or the municipality makes it a real bonus exercise.” 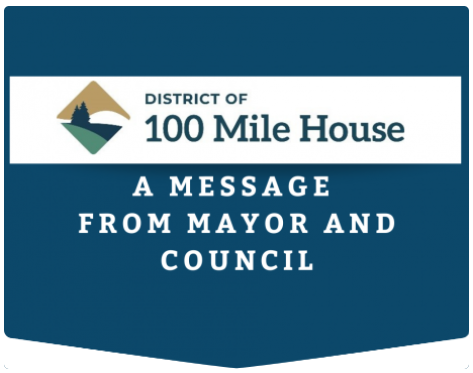 I hope everyone had a healthy and happy Thanksgiving, after a summer of challenges we faced with wildfires, smoke, and the ongoing Covid-19 pandemic.  They had an impact on all of us in some way, and the District of 100 Mile House is no exception.

Our staff worked tirelessly in the Emergency Operations Centre for most of the summer, putting in long hours under difficult conditions, with Covid protocols to follow, and constantly changing weather and fire behavior.  Daily briefings from BC Wildfire Service were crucial in ensuring we were prepared in case the fire became an even greater and more immediate threat.  The District has an Emergency Preparedness and Evacuation Plan, which thankfully was not needed to be actioned this summer for an evacuation.

On behalf of all of Council, I want to extend our sincere thanks to the fire fighters and support crews with the BC Wildfire Service, the RCMP, Search and Rescue, ESS, and all the many agencies who supported the wildfire effort and saw us through another difficult fire season.  I also want to acknowledge the logging community for their tireless efforts assisting the Wildfire Service with the various incidents in our region this past summer – the loggers provide an invaluable support service during fire season.

There’s no question, we fared better this time around, with no evacuation orders in town, but some of our CRD neighbours were not so lucky.  Also, while small, there were several fires in the Community Forest, which we are just in the process of assessing for the volume of burned timber.  Meantime, we can say with confidence that between the 2017 and the 2021 wildfire seasons, we have been preparing for future fire events by undertaking fuel mitigation projects, almost exclusively.

These projects consisted of harvesting, tree thinning, pruning and reduction of fuel loading around 100 Mile House, Horse Lake and Lone Butte.  These and other projects are featured in a recent FESBC news item called: 120 Communities Throughout B.C. Reduce their Risk from Wildfire – Cariboo https://www.fesbc.ca/120-communities-throughout-b-c-reduce-their-risk-from-wildfire-cariboo/.  A link to 41 projects in the region includes our FESBC projects in 100 Mile House.

“The District of 100 Mile House and the consultants hired to coordinate and administer these projects have done a great job to achieve the desired end result on the ground,” says Ray Raatz, Operations Manager, FESBC.  “I have visited the treatment sites several times over the duration of the project and seen the effort and diligence of the crews and machine operators doing the work.  This project has been innovative in maximizing the use of mechanical treatments, which reduces overall costs and allows more area to be treated.  The success of this project is due to the collaborative efforts of all the parties involved, and support from the people of 100 Mile House and area.”

These projects also contributed to fast actioning of the various wildfires that struck in the region in late June and early July.  Community Forest Manager, Bill Hadden notes that “wildfire crews were on-site much sooner than they otherwise would have been, thanks to the road access provided by these forestry projects.”

FESBC funding was also secured for planning, layout and prescriptions for wildfire treatments in the Woodlot up at the 99 Mile Recreation Area.  Subsequently, the District accessed the Forest Employment Program to implement the prescriptions and undertake the wildfire fuel break adjacent to the 99 Mile trails and the railroad south of town.  Not only were local forestry crews kept employed throughout this project, but 100 Mile House itself was the beneficiary of improved protection brought about by the treatments.

All these projects are nearing completion, with just the hand piled and machine piles left to burn this fall and winter.  Burning is expected to begin in early October and may continue into the winter, pending safe and favourable burning conditions, including venting indexes.  Google Earth images have recently been updated, and clearly show many of the treatment areas.

Now to Covid.  Our local Covid cases have been spiking in the past few weeks.  With that, it’s time for us all to re-focus on overcoming this very real pandemic – and we all know how to do this: by following public health orders, making good decisions based on data, and doing our part to be safe, to stay safe, and to keep others safe.   Now more than ever, we need to keep up our sanitation protocols, physical distancing, wearing a mask, and washing our hands.  But above all – get vaccinated.  We’ve come too far to get complacent now.

Let’s keep supporting our local businesses, and also local clubs and organizations.  Our sincere appreciation goes out to our healthcare and frontline workers.  Finally, I want to thank residents for staying calm and for trusting the agencies and plans in place are there to help ensure everyone’s safety – whether wildfire or Covid related.

This is our time to stay strong and stay committed to healthy behaviors that will bring our covid case rates back down.

We are stronger together.