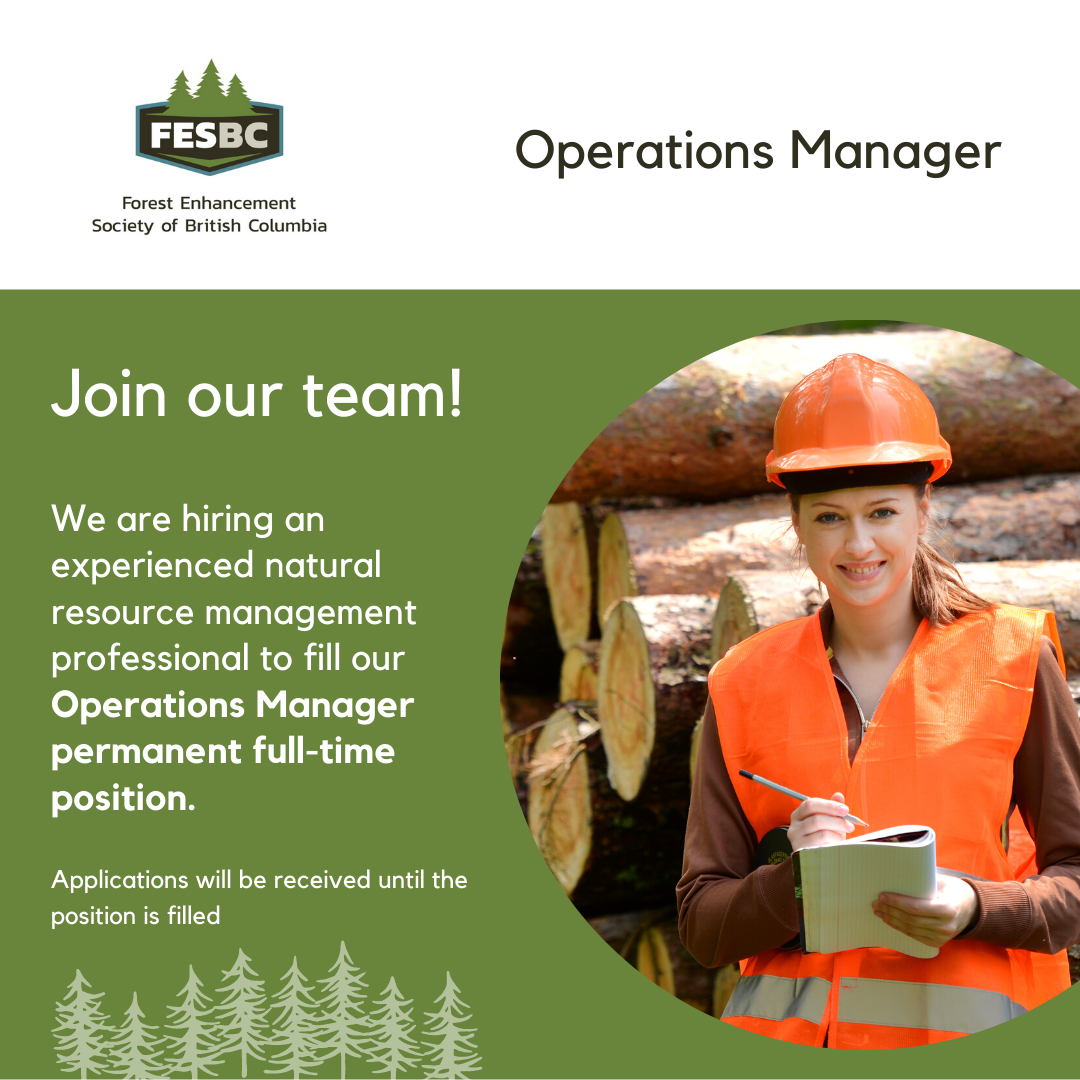 FESBC is seeking an Operations Manager who will assist the society deliver cost-effective and impactful programs to improve BC communities’ resilience to wildfire, forest conditions, wildlife habitat, fibre utilization, and management of forest carbon.

You are an experienced natural resource management professional with a flair for working with others. Your operational background includes managing forest management activities at a program level (harvesting, silviculture, planning, wildfire or the like). You also have expert knowledge in one or more areas of wildfire planning, silviculture, terrestrial wildlife habitat, forest fibre utilization, or forest carbon. You are passionate about enhancing forests to achieve environmental, economic and social benefits. Proof of complete Covid-19 vaccination is required for this position.

Please send you resume and cover letter to the FESBC Office at: office@fesbc.ca In your cover letter, please explain your interest in the position and highlight your suitability.

Applications are welcome until the position is filled, however current applications will be reviewed on Thursday, April 14th 2022. Only those applicants invited for interviews will receive notification from the hiring panel. 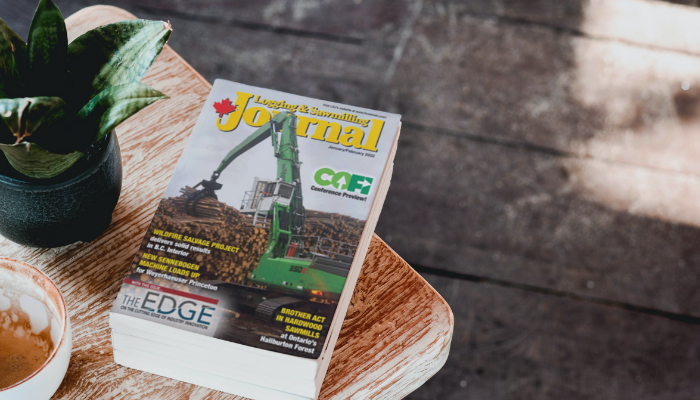 Excerpt: a few different log harvesting and wood grinding outfits were involved in a recent wildfire salvage projected – that delivered solid results – in the Clinton Community Forest in the B.C. Interior. 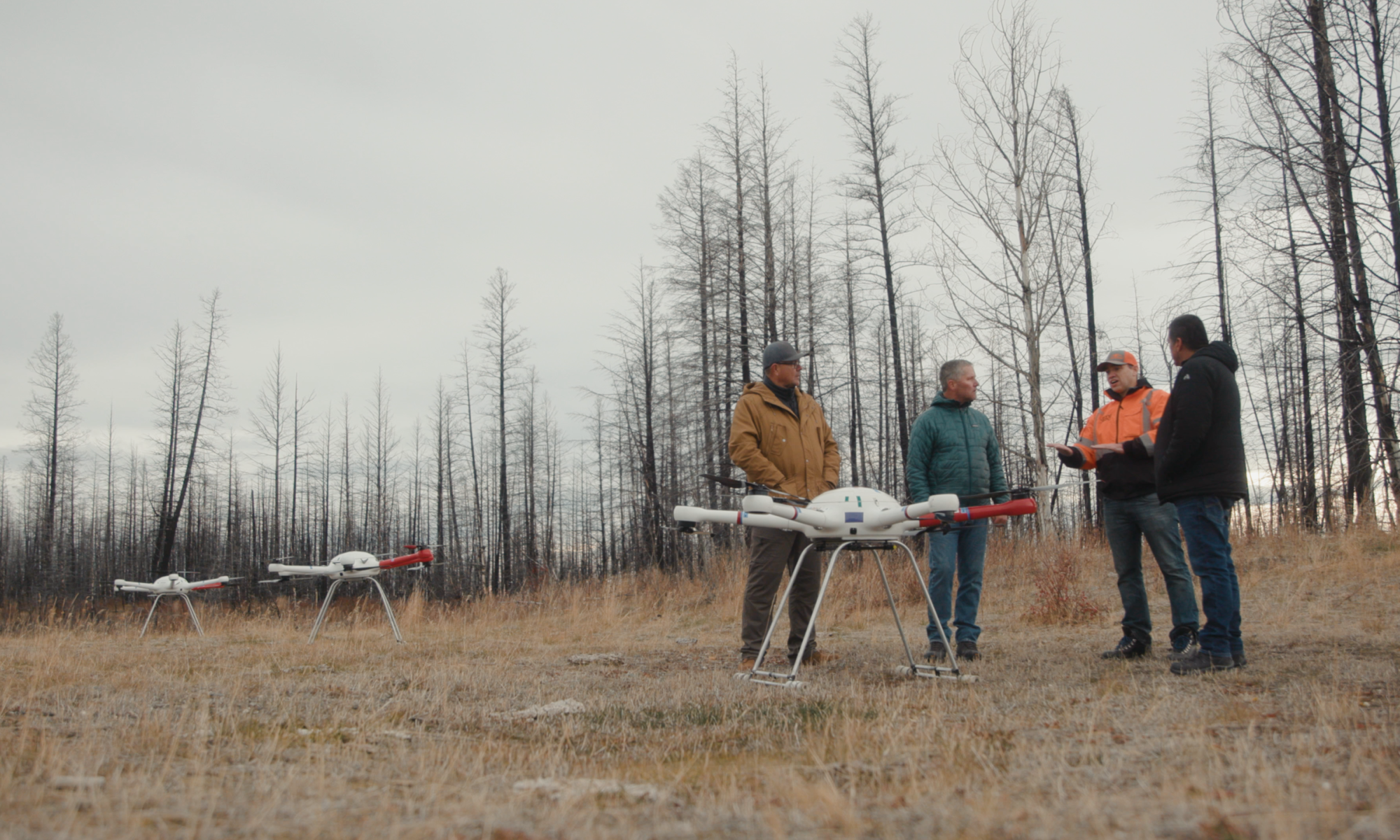 Tŝilhqot’in Using Technology to Restore Traditional Land in the Chilcotin

WILLIAMS LAKE, B.C.—With support from the Forest Enhancement Society of BC (FESBC), Central Chilcotin Rehabilitation (CCR) is using drones to reforest areas of the Chilcotin plateau devastated by the 2017 wildfires. Watch the video.

The project is a trial using drones and hand deployment to direct seed close to 52 hectares – roughly the area of 128 football fields – with thousands of both Lodgepole pine and Douglas fir. The seeds are embedded in a small vessel which contains a mix of soil and nutrients to give the seeds the best chance at germination. If successful, large fire-impacted areas can be restored much faster than by hand planting alone.

“Generations and generations relying on the land, and having the fire come through was very devastating for a lot of people,” said Paul Grinder, Councillor, Tl’etinqox Government. “This is just another way to improve and help the forest regenerate as fast as possible.”

In some areas, safety hazards, steep slopes or remoteness make traditional tree planting by humans difficult, expensive, and time consuming. Drone technology has the potential to complement more standard methods to lessen the overall time to restoration across the vast landscapes damaged by the megafires.

Aerial seeding services for the Chilcotin plateau project were provided by DroneSeed, a Seattle-based reforestation company. The DroneSeed team worked with FESBC and CCR on the project by providing aerial seeding with heavy-lift drones. Additionally, DroneSeed is currently growing approximately 50,000 seedlings–from seed supplied by CCR–for interplanting within the pilot area of other CCR burned areas in spring of 2023. By combining new, innovative methods of reforestation with traditional ones, CCR and DroneSeed aim to use this hybrid approach of seed vessels and seedlings, both of which have distinct advantages in post-wildfire restoration. As part of the collaboration, DroneSeed’s experts will regularly revisit planting sites to track the seeds’ and seedlings’ growth and report progress back to FESBC and CCR.

“We’re here to try and figure out other ways to reforest, so we can do it more rapidly, with better success,” said Danny Strobbe, RFT, Forestry Superintendent, Tsi Del Del Enterprises Ltd. “There are danger trees, steep slopes, and places logging equipment can’t get to that you can’t salvage—there’s places you can’t send tree planters into.”

“We don’t have the resources to plant all the trees lost in the fires or the resources to grow all the seedlings in a short amount of time. This is a tool to help in our current efforts in reforestation and to increase our capacity.”

“We have granted over $29 million of funding toward projects with Central Chilcotin Rehabilitation—they are our second-largest recipient of funds,” said Conly. “They are a fantastic group of Indigenous people that have depended on the lands, waters, and forests in their traditional territories for thousands of years.”

“We’re doing this important work through CCR rehabilitating forest stands that have been devastated by wildfire,” remarked Percy Guichon, Director, CCR. “Proving CCR has the capability and capacity to help manage our resources and our territories goes a long way towards supporting our future.”

The use of drones and technology to re-establish forests could be transformational if it’s confirmed that it can be safer, faster, and cheaper. CCR and FESBC will share the results of the operational trial upon completion.

This project is funded in part by the Government of Canada.

CCR is a joint venture company between Tŝideldel First Nation and Tl’etinqox Government focused on forest initiatives within their traditional territories, with the purpose of providing sustained economic opportunity within their communities and ensuring the long-term sustainability of their traditional forest land-base.

In February 2016, the Government of British Columbia announced the formation of FESBC with initial funding of $85 million and a five-member Board of Directors to oversee the establishment of the Society and the delivery of its purposes. An additional $150 million was announced in early 2017. The purposes of FESBC are to advance environmental and resource stewardship of BC’s forests by: 1) preventing and mitigating the impact of wildfires; 2) improving damaged or low value forests; 3) improving habitat for wildlife; 4) supporting the use of fibre from damaged and low value forests; and 5) treating forests to improve the management of greenhouse gases. As of March 2021, the Forest Enhancement Society of BC has supported 269 projects valued at $237.6 million, generating $357 million dollars in economic activity in partnership with the Province of BC and the Government of Canada. 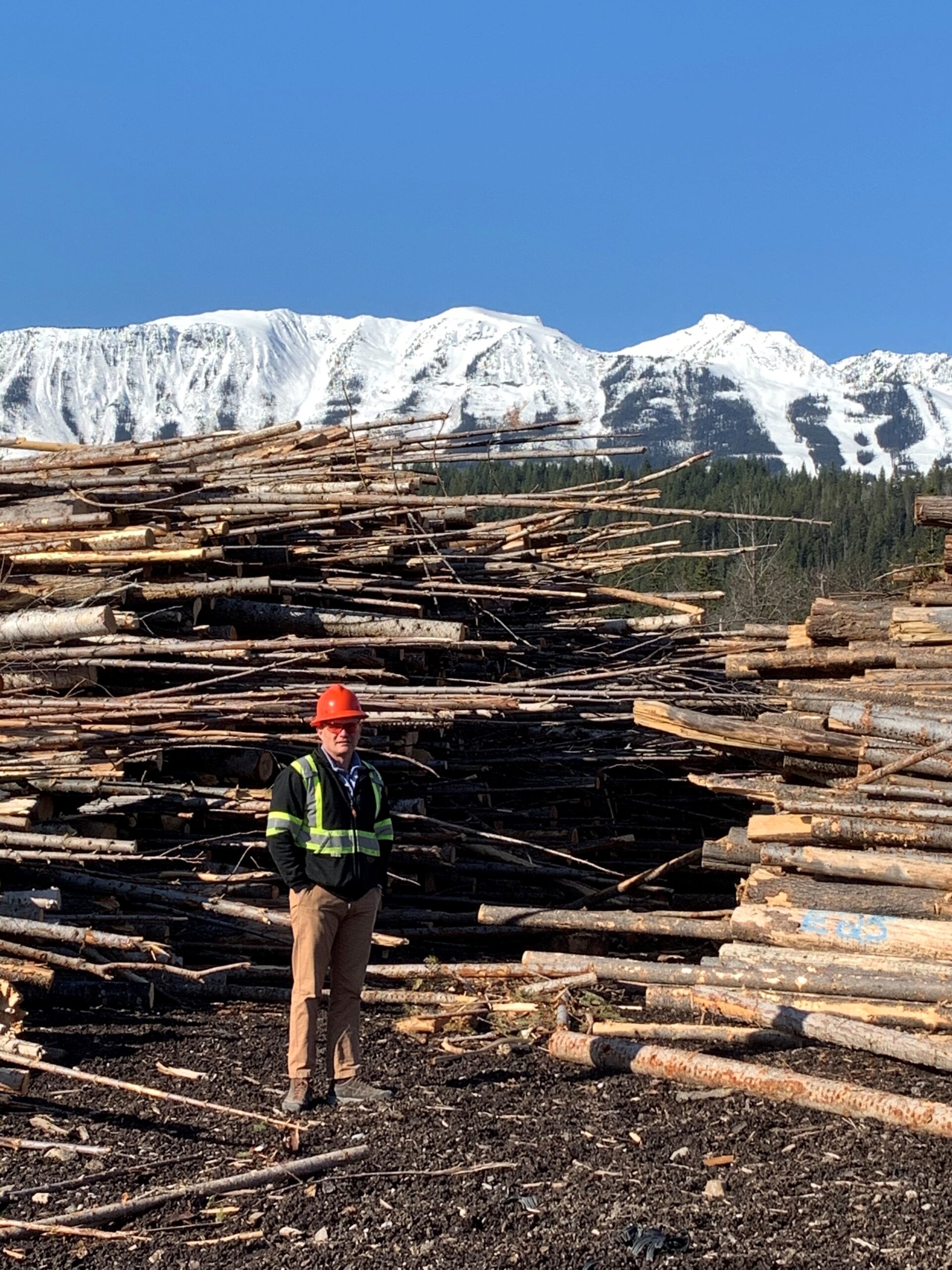 GOLDEN, B.C.—The Forest Enhancement Society of BC (FESBC) has provided $655,000 in funding to LP Building Solutions (LP) to utilize over 30,000 cubic metres of residual fibre to generate power in Golden B.C.—equivalent to about 750 logging truck loads. Much of the residual fibre would normally be left behind on local logging blocks and wildfire risk reduction treatment areas to be burned, as it doesn’t meet sawlog or pulp log requirements. The funding enables an increase in the utilization of this fibre and reduces smoke levels by avoiding pile burning.

A significant number of logs are pulled out of Kinbasket Lake (a reservoir created by the Mica Dam) every year and normally burned. LP sees an opportunity to explore utilizing these logs from the reservoir and is using some of the FESBC funding to see if the logs can be a viable source of renewable energy to generate power for the mill. This project is a climate change solution to make renewable bioenergy to offset the use of fossil fuels in manufacturing and working with the forest products industry to improve forest utilization and sustainability practices by recovering fibre from the lake and utilizing it at LP’s facility in Golden.

“One of the biggest challenges of fibre utilization is having somewhere to use it so this is a unique opportunity where the fibre can be used to generate energy,” said Gord Pratt, RPF, Operations Manager, FESBC. “There’s a need and a desire to utilize this fibre and LP is looking at opportunities to utilize fibre recovery around Golden, including the utilization of fibre from Kinbasket Lake, to generate renewable energy to power its mill.”

Scott King, RPF, Silviculture Forester, LP notes the fibre from the reservoir is free from dirt, making it a cleaner fuel source to be processed into hog fuel. Being able to use this fibre would also result in a guarantee of fibre for the power plant.

“Like anything, when we try something new, people must come together to work collaboratively,” said King. “I’m very proud of what we’re doing as a company. It’s enjoyable to work on a project everyone is keen to get behind and support.”

Interestingly, LP Golden’s generator the fibre will power is based on WWII technology. The utilization of the wood fibre is close to 100% because there’s not a piece that goes to waste or gets thrown out.

Gord Ryter, who has worked as a powerhouse engineer at the facility since 1965, was there when the generator was brought in by Kicking Horse Forest Products in 1965 and said it has been running 24/7 at 3600 rpm for close to 70 years. As far as Ryter is aware, only one other generator like it exists. Having it run steadily contributes to its longevity as it avoids heat cycling, which weakens the metal in the turbine over time.

“The generator is a critical piece of this mill’s operation because it burns waste fuel,” said Ryter. “We have 400 employees here, and its continuous operation has helped guarantee employment for the community. Seeing this machine run that whole time has been amazing.”

Mayor of Golden, Ron Oszust, is also pleased with the project.

“This is an amazing example of industry working to find better solutions for our communities and our environment—thank you to LP and FESBC,” noted Oszust. “Reducing wildfire risk close to our community is critical and being able to avoid the burning of this fibre, along with other waste fibre to avoid smoke, benefits the community. This plant provides many long-term jobs to our community members, and we support the effort to innovate and explore new ways to power the plant.”

The project allows for the utilization of fibre normally outside LP’s economic reach and provides feedstock required by the old, reliable power generator while also reducing the greenhouse gases emitted from pile burning.

“FESBC is proud to support LP’s effort to increase the use of fibre normally burned in slash piles near Golden, and we are also proud to assist B.C. and Canada meet our climate change targets.” said Pratt.

This project is funded in part by the Government of Canada.

About FESBC: the purposes of FESBC are to advance environmental and resource stewardship of B.C.’s forests by: preventing and mitigating the impact of wildfires; improving damaged or low-value forests; improving habitat for wildlife; supporting the use of fibre from damaged and low-value forests; and treating forests to improve the management of greenhouse gases. As of March 2021, FESBC has supported 269 projects valued at $238 million, in partnership with governments of B.C. and Canada. 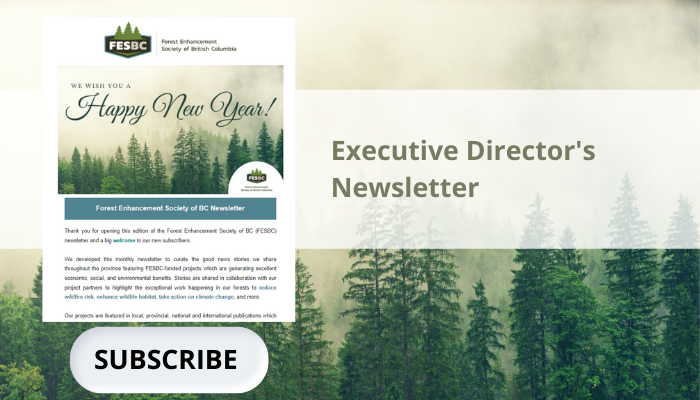 We have developed this monthly newsletter to curate the good news stories we share throughout the province featuring FESBC-funded projects which are generating excellent economic, social, and environmental benefits. Stories are shared in collaboration with our project partners to highlight the exceptional work happening in our forests to reduce wildfire risk, enhance wildlife habitat, take action on climate change, and more.

Subscribe to receive the latest newsletter in your inbox every month!

Watch the BC Forestry Workers are Climate Change Heroes video on Vimeo!